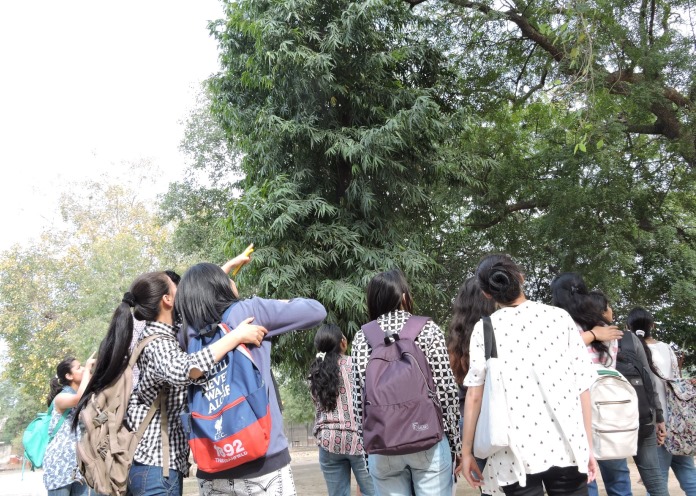 Rapid urbanisation is decreasing the number and diversity of birds in Delhi, so much so that the Government of NCT of Delhi had to declare sparrow as the state bird of Delhi, so it could be protected. There is thus a need to conserve bird diversity in Delhi and raise awareness about the same. Although Delhi has a rich bird diversity, the citizens of Delhi are often unaware of this rich natural heritage that belongs to them. To address this issue, Project Hornbill was initiated by a team of 25 students under the mentorship of Dr. Govind Singh at Indraprastha College for Women (IP College), University of Delhi.

IP College is located in the vicinity of Delhi’s two lifelines, River Yamuna and the Delhi Ridge. Both the Delhi Ridge and River Yamuna support rich avian diversity, and are also the reason of the rich bird diversity found in IP College. However, construction around the College in the last few years has impacted this bird diversity to a great extent. It was thus decided to raise awareness in the students about birds and bird diversity and also attempt to augment the habitat of the birds in and around the College campus.

Following were the objectives of this project:

This research project was part of the Campus Impact Challenge initiative of TERI/Genpact. The Project Report was submitted to TERI/Genpact and was also presented during a Workshop at India Habitat Centre.

A part of the findings of this research project was published as a Research Communication in the Journal of Innovation for Inclusive Development (ISSN 2456-4478).

This research article was picked by the Indian Express, as a newspaper article:
http://indianexpress.com/article/cities/mumbai/bollywood-should-depict-endangered-species-of-birds-in-some-form-or-the-other-4646935/